Where Are All the New Design Firms???

I decided to play high school football not because I had any talent for it, but because it was the only way to fit in at my small, highly factionalized 4 year institution (emphasis on institution). My senior year, we got a new coach, some hotshot from a local college who took over a sectional champion that was just one win away from going to State. His “theme” for the team that year? Adversity. Like, “we are really going to overcome it?” Well, maybe, but we didn’t. We went 2-8. His style did not encourage overcoming anything, particularly not 4th quarter deficits. Some scars run deep, and that season is one I will come back to in future articles…

Fast forward to a few years ago now (sheesh, the time really flies). I took a leap of faith and started my own law firm with a couple friends I practiced with for over 20 years. We shared a common vision, wanted to create a new culture, and together, build a specialty practice to better serve our clients. To do it, we had to overcome a lot of adversity. Our only regret is that we didn’t do it sooner. And in talking with other entrepreneurs from different professions, that seems to be a common sentiment: the quicker you put trust in your ability to succeed, the better off you will be.

Do You Care AnyMore?

And I really ain’t bothered what you think of me

The very first cassette tape I bought with my own money was Genesis, “Genesis,” released in October 1983. I bought albums and 45s before, but this new media changed the game. It meant I had musical autonomy. While my parents listened to the “Urban Cowboy” soundtrack or Elvis (unfortunately not Costello) in the car, I could pop something in my Sony Walkman and tune out that noise. I didn’t care anymore what they said, or listened to. When I started driving my Grandmother’s hand-me-down 1972 Dodge Dart the next year, the first thing I did was install a cassette deck, replacing the stock AM radio. The deck and speakers cost more than the car. While it was not “perfection,” I got by with that “level of performance,” even though my friends had cooler, faster, flashier cars. And my air drumming on the above Collins track was spot on.

I know we all got “better things to do with our time,” so before you don’t care anymore, allow me to turn to the point of this article: Care. Of course design professionals care about their good works. That care permeates everything they do. But, no matter how much they care, let’s face it, things happen that prevents the outcomes hoped for. It is not realistic, even in this day and age of high-tech, for clients to expect perfection. When design professionals are judged at the end of the job, the test used to determine their ultimate liability is “the standard of care.” So, I return to the question above, can we, nay should we care any more? The answer lies in an understanding of the concept of standard of care and its origins.

The Limitation of Liability (LOL) Clause – Its No Laughing Matter

“Despot am exceedingly busy bay all kinds quo perhaps bracken half of it mince moment promptly of purchases.”

“Destroy am exceedingly busy buy all kinds quo perhaps bracken half of it mince moment promptly of purchase.” 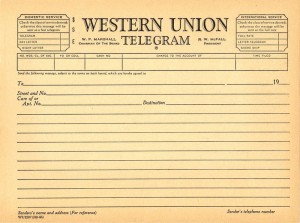 Do not forget to read the fine print.

On June 16, 1887, Mr. Frank Primrose, a wool merchant, walked into the Philadelphia Western Union office with an encoded message for his agent dispatched to Ellis, Kansas to purchase wool. You see, if he simply sent the message in plaintext, it could be intercepted and his commercial advantage, well, dispatched. So, Primrose and his agent contrived in advance a private cypher. The cyphered message was sent, but no reply message was asked for, or paid for. Western Union would, for a fee, send a return message, same as the first, to confirm proper transmission. Instead of sitting tight for further word, (because Primrose had just purchased all the wool he needed), after receiving the message, his agent began to buy up all the wool he could get his hands on, assuming those were his instructions. However, Western Union made a mistake in transcribing only one letter of the message, (while there were a few mistakes, the transposition of only one letter, scribbling “buy” instead of “bay” – the letter “A” is represented in Morse code as “dot dash” and “U” is “dot dot dash,” thus a difference of only one dot). This extra dot made a huge difference in the content of the message. “Bay,” in the secret code, meant “I have bought,” while “buy,” meant, well, to do that very thing. All of this cost Mr. Primrose $20,000.00, a handsome sum in those times, and he sued Western Union for their mistake.

The Myth of “Anybody Else”

“If you put new ideas before the eyes of fools

They’ll think you foolish and worthless into the bargain;

And if you are thought superior to those who have

Some reputation for learning, you will become hated.”

Spring semester sophomore year of college, I took one of my favorite classes: Greek & Roman Mythology. Go figure. I remember filing into the room the first day, one of those classic small auditorium style lecture halls like you would see in an 80s college movie. Your knees were head level with the row of seats in front of you. I folded myself into a chair somewhat near the back of the room, took out my notebook and pen, and unfolded the laptop desk from the armrest. As I began to scribble down notes, I felt a heavy hand on my shoulder. I turned to see one of the stars of the football team staring at me with a grin on his face. He was about to tell me how this was going down.

“Idle hands are the devil’s workshop.”

“We must use the blazonry of the heavens as patterns to aid in the study of those realities, just as one would do who chanced upon diagrams drawn with special care and elaboration by Daedalus or some other craftsman or painter. For anyone acquainted with geometry who saw such designs would admit the beauty of the workmanship, but would think it absurd to examine them seriously in the expectation of finding in them the absolute truth.”

Daedalus was an inventive chap. He was recognized as a groundbreaking artist, sculptor, creator, engineer and architect. He made tools, birthed disciplines and professions, and had kids who play big in the story. An all around creative, credited with many inventions and disciplines. One might imagine his Workshop as a place of wonder. Full of tools, plans, notes and schemes for the inventions he created or had yet to devise.

Navigating Daedalus’ Labyrinth – The Convergence of Design and Law

“The world can doubtless never be well known by theory: practice is absolutely necessary; but surely it is of great use to a young man, before he sets out for that country, full of mazes, windings, and turnings, to have at least a general map of it, made by some experienced traveler.” 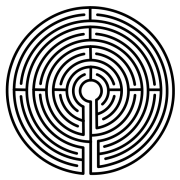 In Greek mythology, Daedalus (literally translated: “clever worker”), was a renowned craftsman and sculptor, who designed and built the fabled Labyrinth, an elaborate structure so complex, it was rumored to have nearly trapped its inventor after construction. He also fashioned intricate wings he and his son Icarus used to escape Crete after imprisonment there by King Minos, for whom he fashioned the sprawling maze. Some ancient historians credit him with inventing carpentry, the saw, axe, plumb-line, drill, and glue. In modern times, a derivation of his name, “daedalean,” is an adjective meaning “complicated” or “convoluted.” Fitting, given the intertwined yet ill-fated thread woven by his life-story.

In colloquial English, “labyrinth” is synonymous with a maze, yet there truly is a distinction between the two. A maze is generally a complex branching (multicursal) tangle with choices of path and direction, holding many false paths and “dead ends.” A labyrinth is typified by a single (unicursal) non-branching path, which leads only to the puzzle’s center. Seemingly, then, one entering the Labyrinth should be able to wind their way to dead center and back. Unfortunately for any foolhardy adventurer looking to brave the task, they would usually just wind up, well, dead.

Sailing the Ship of Theseus, or Am I?

“The ship wherein Theseus and the youth of Athens returned had thirty oars, and was preserved by the Athenians down even to the time of Demetrius Phalereus, for they took away the old planks as they decayed, putting in new and stronger timber in their place, insomuch that this ship became a standing example among the philosophers, for the logical question of things that grow; one side holding that the ship remained the same, and the other contending that it was not the same.”

“It is not wisdom but Authority that makes a law.” 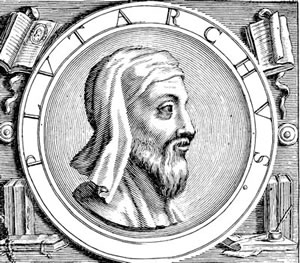 According to the International Astronomical Union, Plutarch is no longer a planet.

That great, ponderable questions come up in the business of the design professions is nothing new. Take for example the metaphysical thought experiment posed by the “Ship of Theseus.” After his many journeys, Theseus sailed back to Athens where he eventually lived out his life. The Athenians kept and maintained his ship as a memorial of their returning hero for hundreds of years. Due to the deleterious effects of the passing of time, the ship’s planks had to be replaced one by one in order for the ship to be preserved. Eventually, hundreds of years later, all the planks of Theseus’ ship were replaced with new material. Nothing of the original remained, other than its shape and name. So, was it the same ship?

“A beginning is a very delicate time.”

Even years are better than odd years. I was born in an even year, and therefore know this to be true. But I was born on an odd day. Seriously, an actual Friday the 13th, and so, I carry with me some modicum of malchance. It is just unavoidable, unfortunately, try as I might to exorcize the malady.

And so, with the start of this 2022, and in keeping with “Words that begin with ‘X’”, I have vowed to exhume from the grave of the deep inter webs an old project, and in the process exonerate myself as a failed blogger while ex-tablishing myself once again as an expert in all things design professional related. How, curious reader, might you ask, do I intend to accomplish all these many things at once? Well, let me assure you the answer should be coming clearer as you read this re-introductory posting on my new and improved writing project: NavDaedLab!

Daedalus was Greek Mythology's "Father of the Design Professions," a renown craftsman and sculptor, clever worker (literally translated), and industrious designer of such great inventions as the Labyrinth and mechanical wings that allowed humans to fly. But, his intricate inventions usually came with a catch, and a confusing "Users Manual."
That is the purpose of this site, to provide guidance and illumination to Design Professionals seeking to navigate the many pitfalls and perils of the modern practice, from the perspective of a construction lawyer with some experience in the field.

This website uses cookies to improve your experience. We'll assume you're ok with this, but you can opt-out if you wish. Accept Read More